This article is to discuss what is the optimum size a concrete floor slab can be casted in a single panel without any cracks and defects especially in the industrial floor sector which demand for high quality floor. Even though the technology behind the construction of concrete slab has improved over the years, besides expecting a floor to be built flat and level, one of the major challenges facing the construction industry is how to built a ‘crack-free slab. Concrete being a vagarious material tends to crack due to various reasons but mainly caused by drying shrinkage, thermal movement and restraints. Therefore, concrete floor cracking may be caused by a single factor but also combination of two or more factors. As such designers and builders can only endeavor to mitigate, minimize, or control cracks but almost impossible to guarantee constructing a large concrete slab with no cracks.

1.0 Why big slabs are preferred?

If slabs are casted in smaller panels and without restraints, cracks can easily be avoided but to construct a large size panel, for example 1,000m2 in a single day successfully without any form of cracks and defects will be a great challenge. Large slabs are preferred as it speed up the job, contain less construction and contraction joints which are potential weakness on the slab if not properly constructed as shown in Figure 1. Another  advantage of minimum joints is to reduce problem with curling of slab at edges as shown in Figure 2. Such curling defects at joints will disrupt smooth operation of lift-trucks  and spalling at joints resulting in continuously costly repair. 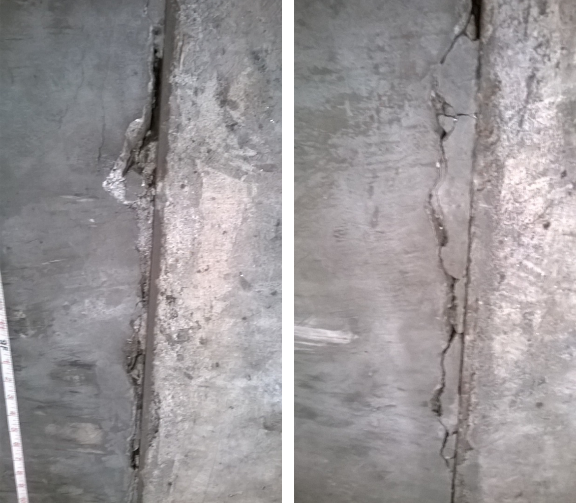 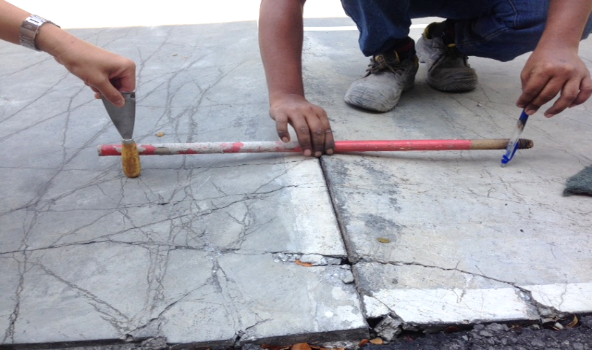 Common factors which may contribute to cracking in floor slab

Subgrade is the original ground and it is best to carry out a soil investigation to study   the soil bearing capacity to support the intended design load. Any filling materials selected for filling low shall be suitable for easy filling and well compaction. A well-compacted sub-base will facilitate loaded vehicles to roam the construction site freely without rutting the surface and also a simple proof rolling method to ensure the subgrade and sub-base are well compacted to prevent settlement cracks.

As thicker slab is stiffer and will tend to produce less cracks compared to a thinner one unless the later is specially designed. Likewise, a thinner slab will also tend to curl more than a thicker slab of similar mix design and working condition. Therefore, to avoid random cracking, contraction joints are created on weaken planes on the slab surface at locations where high stresses accumulate and prone to cracks. In fact, contraction joints are simply pre-determine man-made straight line cracks created to release stresses on the floor surface to induce cracks when the slab commence to shrink, being straight line man-made cracks, nobody will complain. If contraction joints are not provided to disipate the stresses, random cracks will be unavoidable.The contraction joints are carry out using mechanical diamond saw machines the next day or the same day if a green blade is available. The depth of cut is normally one-fourth of the slab thickness and the saw-cutting is carried out immediately when the concrete gained sufficient hardnesss, normally between 8 to 12 hr after the floor is finished. To mitigate random cracks, contraction joint spacings of maximum 36 times the slab thickness, up to a maximum of 5.5meter have produced acceptable results(ACI 302.1R-04). If a slab is 150mm thick, the contraction joints need to be spaced at every 5.4meter.

Contradictly, wider contraction joints spacing of up to 16m x 16m have been successfully carried out reinforced with 20kg/m3 of steel fibres without any form of cracks.

To select welded mesh or steel bars as reinforcement for crack control is one task but placing  and positioning the reinforcement location right is the challenge. The purpose of  reinforcement is to provide additional strength where needed and if cracks happened, it supposed to keep the cracks tight and preventing it from opening and becoming wider. If the location of reinforcement is wrongly placed, for example, placed lower than mid section of slab, it will defeat it’s purpose and may not performed. It is best to position about 30mm from the surface for crack control. To overcome such difficult to position the reinforcement right,  steel fibres or synthetic fibres are used as a replacement for better crack control. Generally, fibres will provide better crack control as they are  3-dimensionally distributed within the concrete slab to absorb any tensile stresses which occur at early stage when the young concrete has yet to achieve the tensile strength to resist cracks. When early micro-cracks developed, the fibre strand will intersect and blocked the micro-cracks from developing into macro-cracks as the concrete shrinks.

Concrete mix design is of utmost important not only to produce high strength concrete but to achieve good workability, cohesiveness, durability and minimum shrinkage to mitigate cracks. The main cause of cracks resulted from volumetric changes of concrete as the water evaporates gradually resulting in shrinkages.

As a rule of thumb, every 6m of concrete slab, can shrink as much as 3mm, as such it is advisable to use lowest permissible water/cement ratio for the concrete mix design without affecting the workability as water being the single greatest factor affecting shrinkage. Research confirmed that 1% increase in water will increase shrinkage by about 2%. When the concrete is still in the plastic phase, the concrete surface dries and shrinks so rapidly that tensile strain exceed the strain capacity of the young concrete which will results in plastic shrinkage cracks. Designing a concrete mix right with minimum shrinkage of less than 3% will certainly reduce drying shrinkage cracks and with high early strength will avoid early thermal  cracks. Another important consideration is the type of cement used as Ordinary Portland Cement (OPC)  will achieve initial set faster with early strength compare to supplementary cementitious materials like pulverised fly ash added.

Therefore, one way to design concrete using minimum water without affecting the workability of the concrete by selecting and packing graded fine aggregate, coarse aggregate with selective superplasticizer in the mix. For construction of floor slabs, the recommended cement content using OPC shall be below 400kg/m3 to avoid curling of slab.

Design error and poor detailing will exposed the slab to greater stresses than it can handled, resulting in cracking. For example, cracks propagated from corners of columns (as shown in Fig. 3) was caused by  diagonal re-bars being omitted (shown in Figure 4). Such re-entrance corner cracks happen in all floor openings and columns where stress concentration are high. 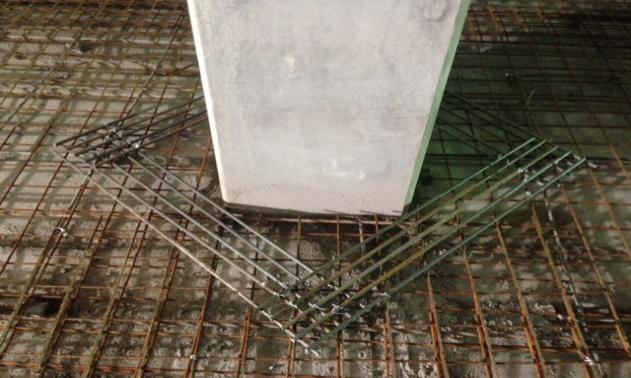 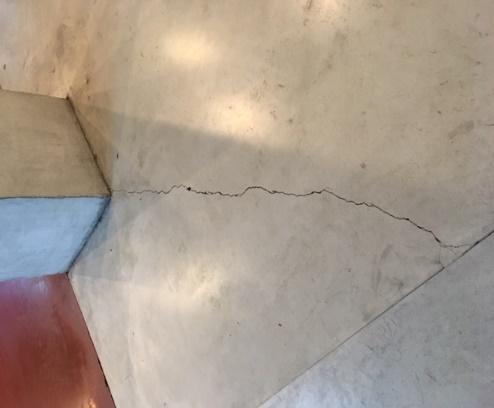 Slabs are generally casted in narrow strip, wide bays or large pour. The recommended aspect ratio of width/length is preferably 1:1 and not to exceed 1:1.5 as mentioned in “Guide for Concrete Floor and Slab Construction”, ACI 302.1R80. Any floor panels with excessive width-to-length ratios as mentioned will tend to crack to release stresses at the mid-panel surface or at locations with excessive stresses. However, this recommended width-to-length ratio could only be extended to 1:2 or more subjected to better understanding of crack control, adding special admixture to reduce stress in concrete like shrinkage compensating admixture.

Conservatively, recommendation of each panel size to be casted as follows.

There is no guarantee that no cracking will be observed based on the above said recommendation as concrete cracks can be considered normal, even though in practice, there were claims that slabs which were 2 to 3 times larger than above-mentioned have been done successfully.

For slab-on grade, casting of slabs can be carried out in large pour within a day but contraction joints (e.g. 6m x 6m interval) need to be performed to induce cracks within the slab to avoid random cracking. When the slab gradually shrinks and contracts, the cutted joints will slowly open up. As for construction joints for slab-on-grade, dowel bars need to be installed to cater for load transfer. As for suspended slabs, all construction joints need the reinforcement bars to be continuous. As for slab on piles, movements joints or expansion joints need to be designed at probably every 30 to 50m to facilitate expansion and contraction due to panel shrinkage and temperature change

For a slab on grade floor built on a well-compacted ground with reasonable flatness and levelness will  allow the slab to slide freely with the sub-base with no surface restraints. As for suspended slabs, restraints will mainly be from the columns, beams, reinforced walls and openings.

For slab-on-grade there are several forms of restraint that prevent the concrete from shrinking freely in the form of internal or external forces as follows.

Normally for thicker slab (normally about 1 m thick) where thermal cracks can occur due to temperature difference between the surface zone and the internal core  of the concrete. The surface of an element will cool faster (contraction) than the hot core (expansion), thus resulting in early thermal cracks and delayed entriquette formation if the temperature difference between the core and the surface exceeds 20◦C.

The resistance to allow the slab to slide freely onto the existing sub-base can be achieved by better flatness control on the sub-base surface. To further reduce the coefficient of friction between the slab and the sub-base, placing a slip membrane using polyethylene sheets with thickness of 0.25 mm is highly recommended besides acting as a moisture barrier.

Cracks often occurs when floor slab is not permitted to move freely especially when the floor reinforcement is tied to walls, beams and columns. For slab-on-grade, it is best to isolate the floor slab from such fixed structures to release any stresses. Likewise, all four ends of a floor panel should be debonded wherever possible from the ground beams or walls.

When casting strip pour (long and narrow slab) try to avoid casting the entire infill slab (panel between two completed adjacent slab) at one go if it is too long (> 30 meters), alternatively contraction joints if permitted should be allowed to control any transverse cracks.

concrete by trapping the water needed for the chemical reaction during cement hydration. Curing allows the concrete to achieve its potential strength and durability. Late curing or no curing is often cited as a major factor that caused surface defects like craze cracks and loss of concrete strength as much as 30%. As such, early and proper curing is essential to achieve the concrete strength needed and to improve abrasion resistance. Finally, to reduce drying shrinkage, proper curing should be carried out for at least 7 days as 80% of ultimate shrinkage is caused by inadequate or no curing.

During the hydration process when the cement reacts with water, the chemical reaction produces heat. In hot countries, compounded with the direct heat from strong sunlight onto the slab surface, it will caused the temperature of the slab to rise, resulting in thermal volume change which expand the slab. Subsequently, during the night when the concrete cools, it contracts and since the tensile strength of the concrete being relatively low may lead to cracking.

There is no arbitrary limit on the size of the slab to be poured in a single day if reasonable crack width is allowed and acceptable but to build a large slab without any form of cracking and defects is the biggest challenge.

The maximum size of pour shall be determined by practical considerations such as the followings: